Here’s an urgent notice: My Evolution Betting System will close its doors down in 1 day from now at midnight on June 13, 2018! You have a little over 24 hours left to join the Evolution before we no longer take on any new members.

Plus: Your purchase is fully covered by our iron-clad 100% money-back guarantee if for any reason you’re not happy with the results of my Evolution Series. 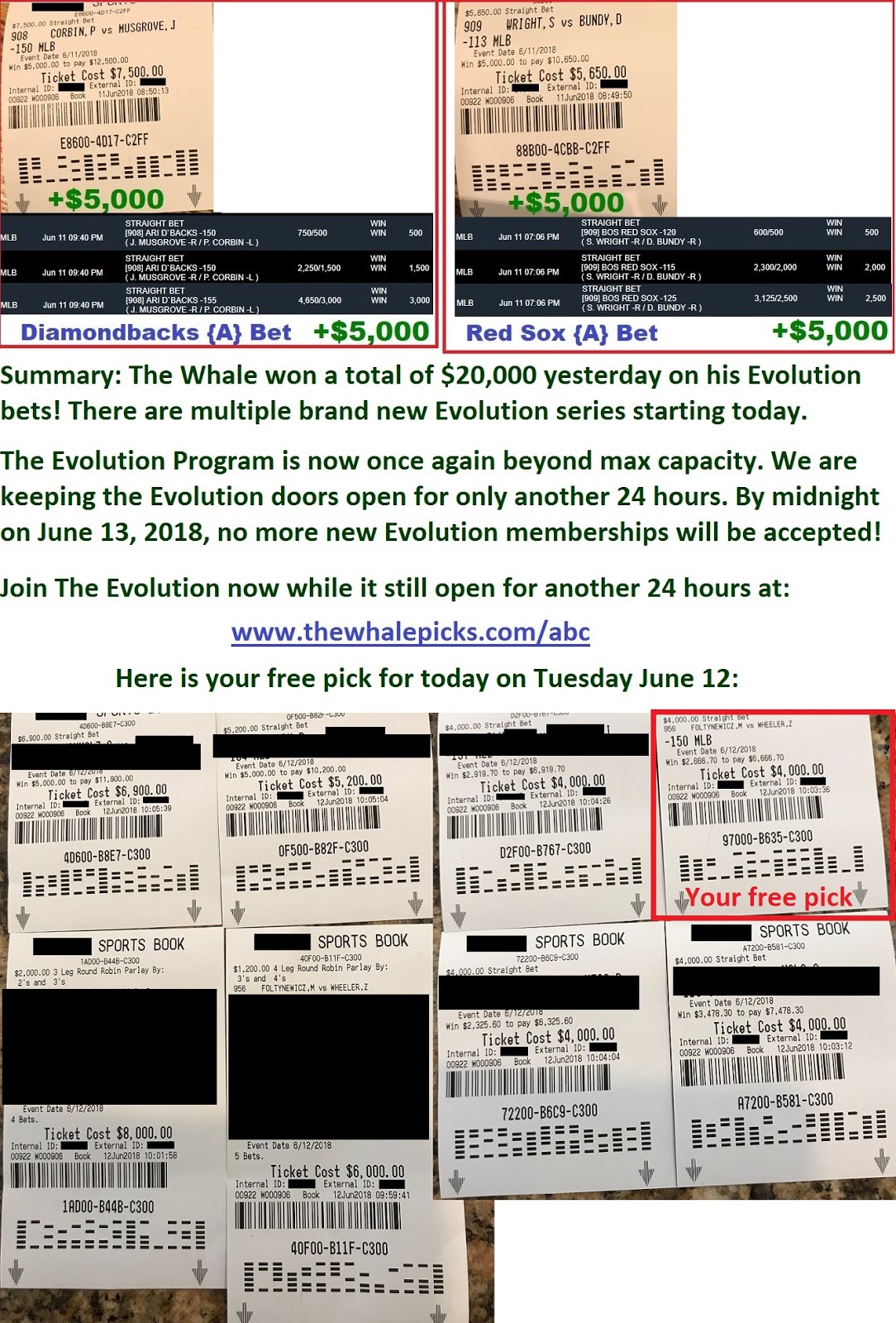 Right now, I’m on an Evolution winning streak that’s stretched for 36 wins and 0 losses. In fact, the Evolution winners are so accurate that out of 36 series so far, I’ve only had to go to the {C} bet one time (which won easily).

So, how much money have I won after going 36-0 on my Evolution wagers? After all, it’s how much you win in profits that really matter, right?

How does making more than $145K in just one month of betting on the Evolution system sound to you?

That’s over $145,000 in my Evolution winnings you’ve already missed. Enough money to buy a house. You’ve totally missed it.

How much longer are you willing to sit out?

You have now literally seen it with your own eyes how I have won nearly $150,000 in a little over a month from betting on my Evolution picks. I’m currently on track to win over half a million dollars by the end of the baseball season on my Evolution series.

Urgent: There is a brand new Evolution series starting today on Tuesday!

Wanna see the full record of my Evolution picks? Here, take a look below for a complete recap of my flawless 36-0 Evolution winning streak:

I’m currently up $145,180.19 in profits so far in just one month of betting on myEvolution picks, and you’ve literally witnessed it all happened yourself. The proof is in the pudding.

Am I satisfied? No, not even close! I’m not happy until I can show you how I can make millions off my Evolution wagers. I can’t wait to prove it to you. And what a joy it would be to see you share into the success, too.

I put my money where my mouth is because talk alone is cheap. Any wheeler dealer can sit back and draw up fancy graphs to tell you how much they can hypothetically win. But what tout has actually won real money with proof of their betting tickets over the last month, let alone to the tune of nearly $150,000? And combined with the round robins, I’m up hundreds of thousands in the last few weeks,

Why do I bet the way I do? It’s simple: I know that it’s not enough to just sit back and tell you that I can win. It’s far more believable when I can go out and show you proof of how I can win hundreds of thousands to millions of dollars from betting on myEvolution series.

Plus, isn’t it nice to know that the same man who is giving picks out to you is the same professional sports bettor who has hundreds of thousands on the line each week on the same games? That way, there’s no doubt left: The only way I can benefit from this program is by winning. No ifs. No ands. No buts about it. If I cannot help you win, I’m going to be out millions of dollars overall.

So at Whale headquarters, we’re not interested in whipping up some glamorous charts to tell you how much my picks can theoretically win. My goal is to literally show it to you.

Now, my next great mission to help you share into my success. Join a paid membership now to the Evolution program during its last 24 hours of opening, and you can start winning with one of the winningest sports bettors – ever!

Remember: The best time to Tail The Whale is when I’m hot. Right now, things are seriously heating up, and may be the worst possible time for you to sit on the sidelines.

Is this a winning streak you can really afford to only sit and watch on the bench?

How would you feel if I win hundreds of thousands to over a million dollars off my Evolution plays for the rest of this season, and you completely missed out on it because you only sat back and observed? Wouldn’t you like to have a piece of that pie?

Newsflash: You have a little over 24 left to join my Evolution Betting System. By midnight tomorrow, we will no longer accept new orders:

Plus: Your purchase is fully covered by our iron-clad 100% money-back guarantee if for any reason you’re not happy with the results of my Evolution Series.